When it comes to wealth topics, you will not forget talking about Bill Gates. This investor, programmer, philanthropist and businessman is the chairman of Microsoft Corporation which is the leading company with regards to computer software and programs in the world.

Though Bill Gates has reached this kind of success, you will be amazed to know that he is a dropout of Harvard University. This scenario is so ironic to see knowing that he should have a good and complete education in order to become this successful but the thing is he has this status. He has proven that becoming rich and successful is not just dependent on education that there are so many successful people there without their diploma. 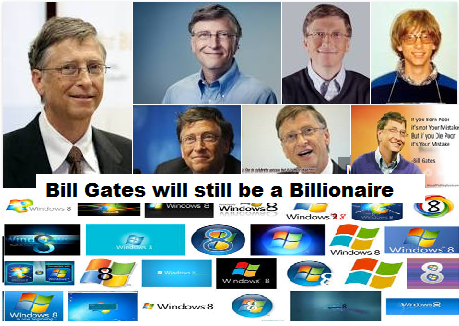 Looking at the lifestyle of Bill Gates, he gives away 58% of his annual income but it’s amazing that he can take it back in just a short period of time. For how many times, he was considered as the richest man in the world who is engaged in social works and other activities for the benefit of the people around the world.

Bill Gates’ riches is getting higher annually and it is surprising to know that even though he will give 98% of his wealth away, he will still be a billionaire. As of November 2013, his wealth was around 76.5 billion and if we are going to calculate his wealth when he will give away 98% of it, the remaining will be $1.5 billion. It shows that when it comes to riches, this man has something to say. In fact he never leaves the spot to the lower portion when we talk about the richest man in the world. As long as Microsoft is there, his riches will constantly increase.