It is Legal to Marry a Dead Person in France

Posthumous marriage is legal in France. To understand what this kind of marriage is, this is when someone marries a dead person. This is also practiced in different countries around the world which include China and Sudan despite the fact that it is heavily criticized.

What’s so interesting on this issue in France is that it happened mostly between soldiers who died in World War I wherein the women who were left find a proxy soldier to marry the deceased one. There were so many instances when women got depressed because their partner never returned home and they became sentimental over the matter up to the point that they are not ready to let go of the person that led to marriage. 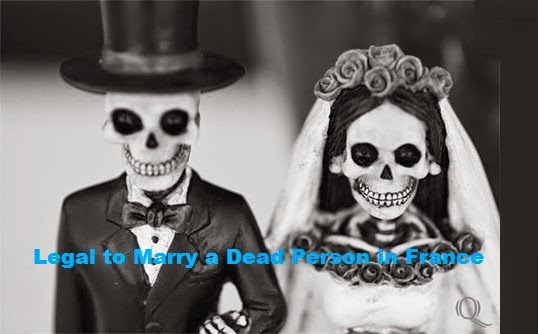 Looking at the history of this custom, we will draw back to the early France wherein a dam broke in 1950s killing 400 people in Frejus which included Andre Capra who was engaged during that time to Irene Jodart. Because of what happened, the lady pleaded with the president named Charles De Gaulle and the case went to court. The mainstream media even supported her that materialized her dream of marrying her dead fiancé.

This is quite odd and gross to listen to especially to those who do not agree with the practice. For some, this is a sign of true and everlasting love wherein even death cannot separate. We cannot blame the person in engaging in such activity if love is involved. Being in the situation may cause someone to be called insane and the like but the idea of not letting go of the promises and the love that had been agreed by two people is something so divine. The issue here is not about condemning the person but understanding the situation that when time comes, healing can happen.