A Museum in North Korea Blames the USA for Mass Murder

We rarely hear news about North Korea and this is due to the fact that it has secluded itself from the world. Aside from being a communist country, it also has a very rich historical background and it dates back to the time when its leaders assumed the seat.

One very interesting fact about North Korea is a certain museum with all the hatred of the country blaming the USA for mass murder. The museum is called Sinchon Museum of United States War Atrocities. This museum is located in Sinchon, North Korea displaying the massacre that took place in the place with the USA as the culprit.

According to history, the said massacre sacrificed the lives of 35,000 people in a series of events from October 17 to November 7, 1950 wherein during that time, the USA army was there and it was an American occupation. 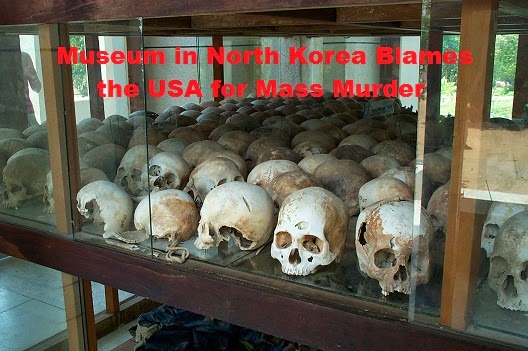 In the museum, there were buildings, grave sites and other memorabilia of the said even that is so painful for the Koreans to remember. The story about the said massacre is that there were vigilantes in the place and the Americans were there. Since it was an American occupation, there should be peace in the area and that murderers should be managed by the USA. But the thing is that it didn’t happen and there are stories telling that America did not even participate and just let things happen that eventually sacrificed the lives of many Koreans.

This is one of the reasons why North Korea still considers USA as an enemy nowadays. The recent issue about North Korea is with regards to the launching of rocket that was protested by many nations especially its neighbors. Until now, North Korea is still a communist country and has closed its doors to the world.