An Author Wrote a Novel Without an “E”

It is good to read novels and you might have in your shelf a lot of these books from different genre. I myself personally love reading novels due to the fact that they are capable of feeding my mind with good stories that move me. The more I read about novels, the more I am capable of becoming sophisticated with my life and here come a novel that you might think peculiar but cool in the essence.

The novel is entitled Gadsby. It was written by Ernest Vincent Wright in 1939. It was composed of 50,000 words and what’s amazing about this novel because on the content, you cannot see any letter “E”. Because of the unique condition of the novel and brilliance of the mind of the author to do such thing, it became popular and noted in the history. 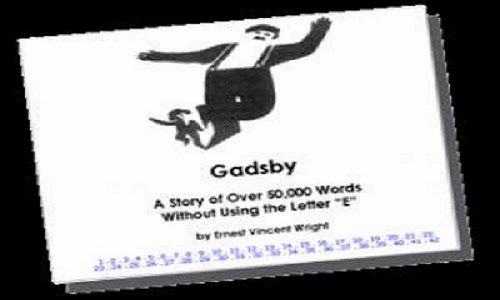 The genre of the novel is fiction wherein there is a city called Branton Hills and a protagonist named John Gadsby and a youth group he organized. The novel was written in the form of lipogram and not having any letter “e” is the main attraction. When the book was published, it did not become popular instantly. In fact, it was lately discovered by several book lovers who are into distinct books. For the record, it was self-published by the author that became known to book lovers.

It was in 1968 that the novel became public domain because of failure to renew copyright of the author in the 28th year of publication. There were several subtitles for the book and one of them is 50,000 Word Novel Without the Letter “E”.

This is such an amazing fact that you should not miss. The thing about writing a novel is capturing the taste and senses of the readers but this time, the book captured more than these but the interest of the readers.