Have you ever observed something that is extraordinary and out of this world? How about watching a river running backwards, will that freak you out? If you could witness such event, then you would probably jump out of your skin right away.

Well, it did happen in Mississippi River. In 1811 and 1812, a series of earthquakes emanated from New Madrid, Missouri, and were felt as far away as Ohio and South Carolina.It was recorded magnitude 8 but researchers refused because according to them, they were using the newest intensity scale. They put it in the 7 range. The soil beneath the Mississippi River rose, temporarily changing its course so that it flowed backward. It came about when a thrust fault created a sudden dam several feet high near the bottom of the river loop near New Madrid. 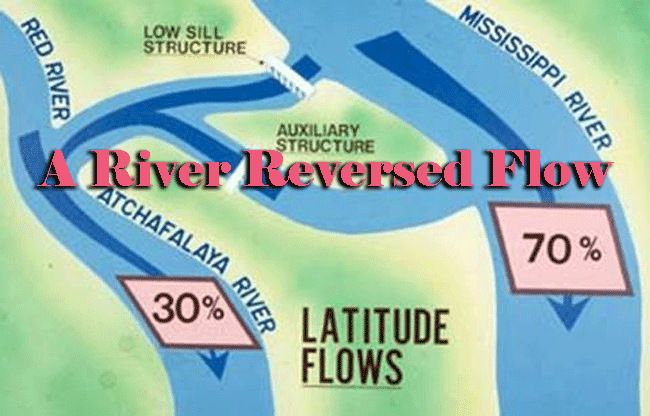 According to the boatmen who were rudely awakened in the middle of the night, and had to hold their hats on while their boat went rapidly upstream for "more than a mile," ... "four miles" ... "at the speed of a fast horse" ... "It was a current going backward."

"In a moment, great waves wave come up the river that I never seen one like it at sea. It carried us back north, up-stream, for more than a mile. The water spread out upon the banks -- covering three or four miles inland.”

"It was the current going backward. Then this wave stopped, and slowly the river went right again.”

"Everywhere there was noise like thunder. The ground was shaking the trees down. The air was thick with something like smoke. There was much lightning.”

Muskogee people are descendants of the Mississippian culture peoples, who built earthwork mounds at their regional chiefdoms located throughout the Mississippi River valley and its tributaries. They believed the phenomenon was a river god, the Tie Snake, jolting under the ground startling the waters from beneath.
Back in the good old days, the Tie Snake was believed to be an antlered river monster which harbored beneath the water and connecting the Upper and Lower Worlds, order and chaos. Muskogee culture focused on communal prosperity, but their traditions had been significantly altered by the infiltration of European traditions. Some Muskogee people believed that the Tie Snake was calling them to return to a traditional lifestyle—and warning them to stop the Europeans from maxing out their culture.

Hurricanes can cause coastal rivers to reverse flow rooted in researches. Between the extremely strong winds and the massive waves of water pushed by those winds, rivers at regular or low flow are forced backwards until either the normal river-flow or the elevation of the land stop the inflow.

This reversal of flow of the mighty Mississippi is but one measure of the extreme force of Isaac. This is a reminder why we shouldrespect hurricane warnings.

Things like this might happen again in the near future. As a matter of fact, minor tremors do occur along the New Madrid Fault Line on an almost daily basis. Scientists believe that another major quake is unpreventable. Populations dwelling along the Mississippi River are woefully ill-prepared for the kind of earthquakes that occurred in 1812. It’s not a matter of IF such an earthquake will occur – it’s a matter of WHEN. Time will tell.