In May 24, 2013, a game called flappy bird was released. It was developed by a Vietnamese guy named Nguyen Ha Dong and published by GEARS Studios a small independent game developer based in Vietnam. The mechanics involves tapping the screen of the phone to help the bird flaps upward. If the screen is not tapped, the bird falls due to gravity. The objective to the said game is to direct a flying bird, which moves non-stop to the right between each coming set of pipes without colliding with them, otherwise the game ends and the bird dies. The good thing is it is just a game.

Do you have any idea how many millions of birds were slaughtered each day by human infrastructures? Strangely speaking buildings and windows topped the list.  Other serial bird killersare high tension lines, vehicles, pesticides, communication towers, wind turbines and even cats. Yes, our friendly kitty pet cat can also be a killer of this two-winged friend of ours. 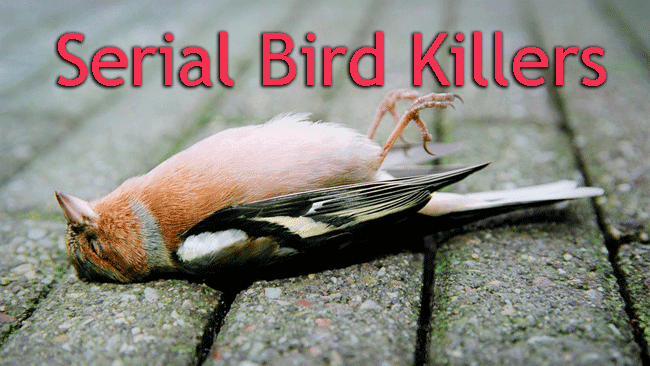 Tall buildings under construction often have clear windows that birds would actually think it is safe to fly through it. And when they did, they end up suicidal. The solution for this is in the hands of the construction workers. They can cover the windows with magazines or nets to alarm the birds of its danger.
High tension wires fall on the second place in the list.As the birds fly at night, they are using the stars for navigation. They often get confused with the tower lights thinking it is a star.

Kidding aside, cats do play a role in killing birds. It is up to you if you would choose to kill your cat in the house or allow them to catch birds in the backyard instead.

Pesticides are dangerous not only to birds but to humans. Pity the birds but we cannot put our harvest at stake by not using pesticides. Otherwise, developers should make bird-friendly pesticides.

While enjoying your mobile phones at home or of any sort, birds got killed by those lines. Wind turbines on the other hand contribute a little percentage in the record. It is speculated that it will increase because a lot of farm lands are now building gigantic wind turbines. Therefore, more birds will dig their graves in the farmlands.

If flappy bird would be real, then he must be very scared to mind those things that could kill him other than flying through two green pipes.