Do you know that the most luxurious toilet in the world was made of pure gold?

Colloquially known as throne of grace, toilet has been as a part of our lives. From urination to defecation, this piece of thing offered us so much relief during the times when the call of nature comes in. This creature comfort would really save you from hell if used right on time!

A toilet is a plumbing fixture used for defecation and urination. Modern toilets consist of a bowl fitted with a hinged seat and are connected to a waste pipe where waste is flushed. Toilet has other name like privy, latrine, water closet, or lavatory.

In 2001, this rather luxurious toilet was built which made up of solid 24-carat gold and decorated with gems. It was featured in the “HALL OF GOLD” in Hong Kong, at Hang Fung Gold Technology's showroom. It is worth more than $29 million as of today. 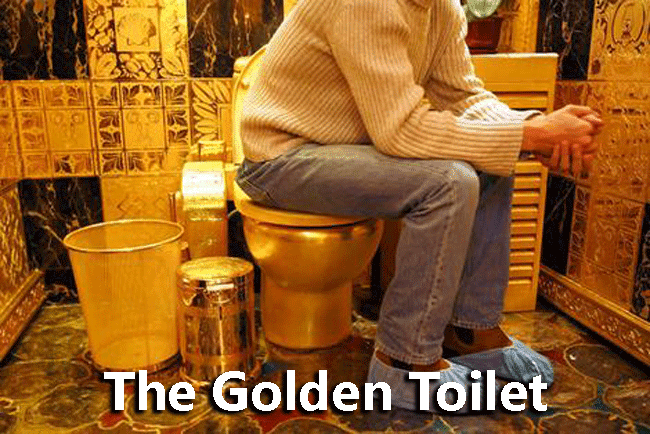 Not just the toilet was gold but the sink, tiles and doors were also made of solid gold, the whole washroom. It is being displayed for the spectator’s eyes only. While visitors are allowed to go in, they have to wear plastic covers over their shoes to avoid scuffing the 900-gram gold bars embedded in the floor.

Lam Sai-Wing was the brains behind this, a jeweler who was inspired by communist leader Lenin's vision that the extra ordinary thing to do with gold is to be used in building public toilets. The toilet was built as a marketing strategy to attract tourists from around the world. Unfortunately, the toilet might not be around for long due to changes in the Hang Fung jewelers’ operations. They have decided to melt the golden toilet in order to finance their expansion to Mainland China.

It seems to me that the inventor of this toilet didn’t really embrace the meaning of flushing money down the toilet after what he has invested in making such toilet.