Home » Health Trivia » Trivia » Urine is Not a Waste to Waste

Urine is Not a Waste to Waste

Who would have thought that a 0.2ml of urine could generate 1.5 volts of electrical charge enough to power a disposable health kit.That is not the only benefit one could get from urine.Another is itsrole in survival like in jelly fish stings and during dehydration and extreme heat in the dessert: it is used to cool down body temperature by soaking a piece of cloth and covering it over the head. What is urine and its composition and why it is considered the next big thing in the power production.

Urine is a sterile liquid waste and by-product of the body secreted by the kidneys through a process called urination. It is sterile until it reaches the urethra where anaerobic Gram negative rods and cocci propagate a bunch of population. Urine is an aqueous solution of greater than 95% water. It has also concentration of urea 9.3g/L, chloride 1.87 g/L, sodium 1.17 g/L, potassium 0.75 g/L, creatinine 0.67 g/L and other dissolved ions, inorganic and organic compounds. 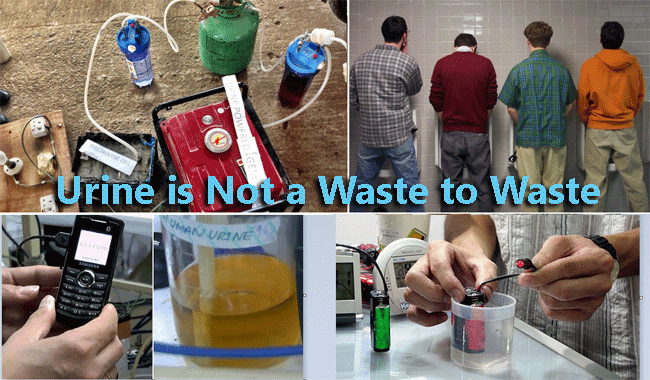 It contains large quantities of nitrogen (from urea), phosphates and potassium which are the nutrients significant for the plants to survive. Studies have shown that an actual 1 liter of urine diluted in 5 liters of water can be used as direct fertilizer.

Interestingly enough, researchers in the Institute of Bioengineering and Nanotechnology, Singapore have invented a battery powered by urine. Other research attempts were done by Dr. Shanwe Toa and Dr. Rong Lanfrom Heriot-Watt University,UK. They investigated whether urine could be used to create energy via new, low-cost fuel cells. They developed a prototype which can turn urine into energy called Carbamide Powder System. Though it sounded great still it posted disadvantage. Their research has limitations in terms of material safety during storage and transport. One more thing is the cost.

In the history of manufacturing gunpowder, urine has played a significant role. As a nitrogen source, it was used to moisten straw or other organic material, which was kept moist and allowed to rot for several months to over a year. The heap when washed and allowed to evaporate would produce crude saltpeter crystals. This salt was very vital in making gunpowder.

So, no more waste would go to waste this time.