This may sounds odd but yes, a maggot can actually heal up your wounds. Considered more effective than modern antibiotics, maggots raised its flag in the field of healing wounds. It is known for a lot of names like maggot debridement therapy, larval therapy, larvae therapy, biodebridement or biosurgery.

Its chronicle started when as wound treatment by Maya Native Americans and Aboriginal trines in Australia. In the Renaissance times, military physicians observed its significant role in healing wounds of wounded soldiers. The use of maggots caused morbidity and mortality to drop. During that time, there was severe scarcity of medications specially antibiotics.

During the American Civil War, a ranking Confederate medical officer in the name of Dr. Joseph Jones said that he had frequently seen neglected wounds… have been filled with maggots… these worms ate only dead tissues and did not enjoy the clean and healthy tissues living the wound clean and as red as fresh meat. 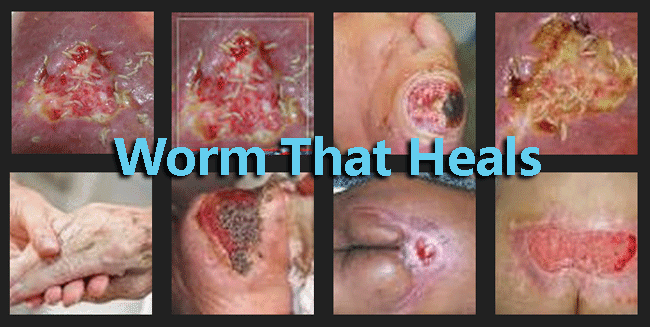 One reported account was recorded during the World War I when an orthopedic doctor discovered the amazing efficacy of maggots in healing wounds. One soldier has been left in the battle field with sustained compound fractures of the femur and large wounds at the abdomen and scrotum. When examined thoroughly, they saw thousands and thousands of maggots filled the entire wound area. After the maggots were removed, what’s left was a fresh and pink healthy tissue, a good sign of healing.

Maggot therapy gains popularity up to this time. Researchers are non-stop in discovering better ways of improving its use in the medical field. Now, it is popularly used intreating osteomyelitis, abscesses, burns, and chronic empyema.  These maggots are feeding on necrotic and dead tissues sparing the healthy ones. Therefore, wound heals. In 2004, the US Food and Drug Administration gave permission in producing and marketing maggots for debriding non-healing necrotic skin and soft tissue wounds like pressure ulcers and diabetic foot infections. It can be availed only by a prescription of a physician.  British National Health Service permitted doctors in prescribing maggot therapy. It has been made legal to prescribe as medical drug in US and Canada as well in countries of Europe.

The use of maggot therapy saved a lot of patients in suffering possible side effects of popping antibiotic pills. It may feel very uncomfortable to have strange worms inside the body but it is not just worms. These are worms that worked hard to heal devastating wounds.