Home » Nature Trivia » Trivia » How Strong Is A Lightning Strike?

How Strong Is A Lightning Strike?

By definition, lighting is a strong electrostatic discharge between the electrically charged regions of the clouds either within or between or between them and the surface of the earth. It is strong enough to destroy a whole coconut tree, rip off a branch of an acacia tree, or kill an animal when hit by its point of strike. A lightning flash can contain 1 billion volts of electricity and is believed to be 5 times hotter than the surface of the sun.

How does a lightning can form?

It primarily occurs when colder air masses mixed results in atmospheric disturbances necessary for polarizing the atmosphere. The charged regions within the atmosphere temporarily equalize through a lightning flash named a strike, where the lighting hits an object on the ground. It does not only occur during low pressure. It can occur during dust storms, forest fires, tornadoes, volcanic eruptions and even in cold winters where commonly known as thundersnow. 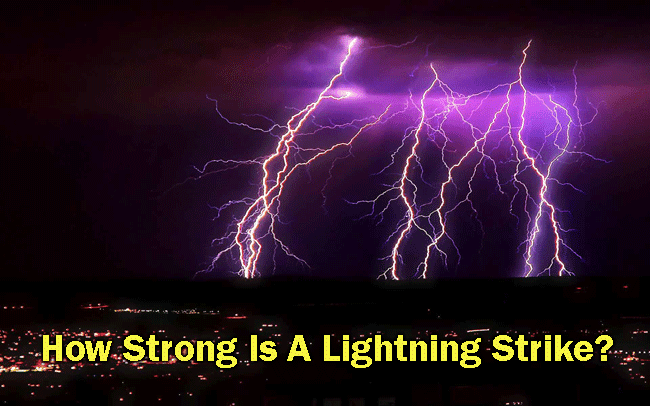 There are three primary types of lightning; from the cloud to itself called intra-cloud (IC), from one cloud to another cloud (CC), and between a cloud and the ground (CG). Lightings are always followed by a loud sound called thunder. Though we often notice that not all lightings are accompanied by thunders but in reality they occurred together but heard or viewed at different times.

Many factors affect the frequency, distribution, strength and physical properties of a lightning flash in a particular place. These may include ground elevation, latitude, prevailing wind currents, relative humidity, proximity to warm and cold bodies of water.

The temperature of the lightning is extremely hot. It is five times hotter than the sun’s surface. It poses great danger when people struck by it. According to records, 2,000 people are killed worldwide each year and hundreds are left miserable suffering from memory loss, weakness, numbness, or even deformities. So no one should really under estimate the power a lightning has.