12,000 resident are evacuated from the foot of Mt. Mayon as PhilVolcs warns on its possible eruption. Last Monday, September 15, Philippine Institute of Volcanology and Seismology head, Renato Solidum, raised the volcanic activity alert status of Mt. Mayon to Alert Level 3 from Level 2 as the signs of impending eruption had been on going for weeks.

Phivolcs had already recorded 32 low frequency volcanic earthquakes and 39 rock fall events all showing that the magma inside the volcano had been rising. The states agency also predicted more intensified activities and eruptions of the volcano in the coming weeks. 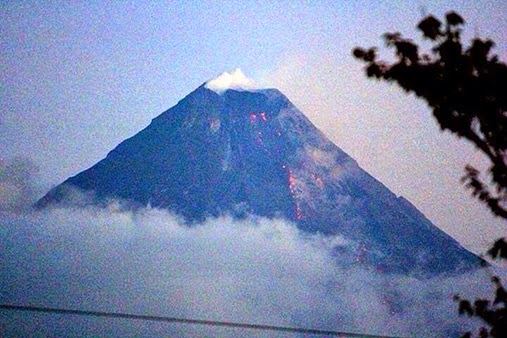 Gov. Joey Salceda of central Albay province said that because of the raised alert level, the 12.000 people were forcibly evacuated in the 6-8 km extended danger zone. The families were taken to their temporary shelter and they might stay there for three months. The authorities ordered no-go area, restricting people from entering the danger zone.

Despite the high level of alert warning, the predicted eruption is not expected to have an impact in any industry nor in the farm output around the area. On the contrary, the eruption could increase tourism in the area just like in 2009. As recorded, the volcano had already erupted 50 times in 600 years. The most devastating eruption was recorded in 1841 that killed 1,200 residents.

Mt. Mayon had been known as a tourist spot for its perfect cone shape. The land around it had been bountiful with coconuts. Despite that It is recorded as one of the most active volcano in the world, people still live and have their livelihood around the volcano. Reference: interaksyon, abs-cbnnews